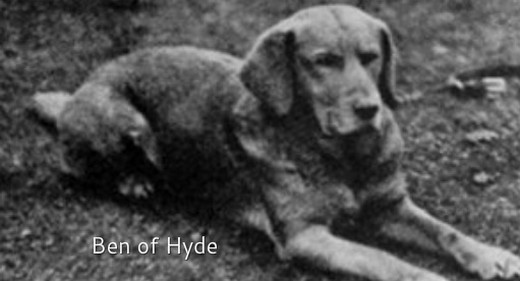 Ben of Hyde, born in 1899
Pedigree Ben of Hyde
Pedigree Radclyffe's Neptune
This is the first ever yellow Labrador registered in 1899 Ben of Hyde is this were our fox reds came from what's people's views on this
https://retrieverman.net/tag/ben-of-hyde/
Fox Red Labrador Retriever
History of the shade, Author: Gregg Tonkin, Little River Labradors 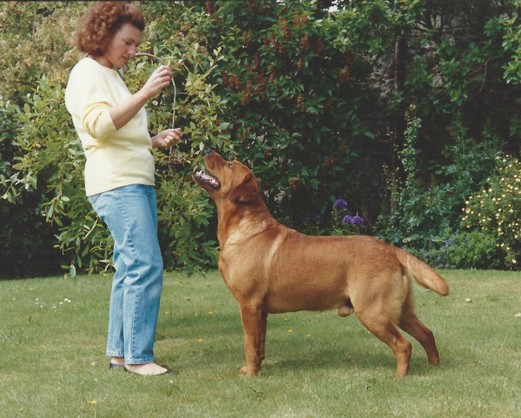 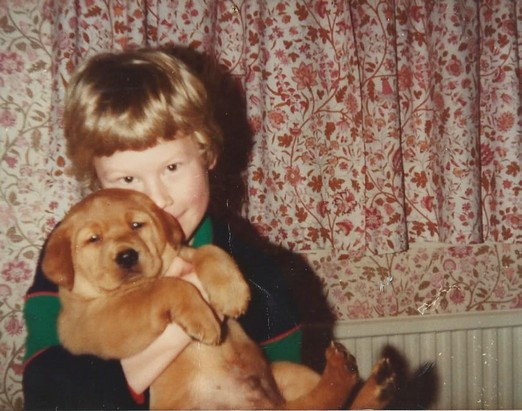 Baasco 5 Week
Ch Wynfaul Tobasco By Cricklecreek Corrie x Wynfaul Flutter
Fox red is not a separate color of the Labrador but only a shade of yellow. In the early years of the breed development, fox red or dark yellow was the original yellow shade of the Labrador Retriever. The original yellows were in fact called Golden until the British Kennel Club came to register them. They argued that "gold" was not a colour, so yellow they became. One has to only look at the first yellow Labrador ever recorded, Ben of Hyde in 1899 sired by Major Radclyffe's "Neptune" out of Lord Wimborne's "Duchess" both blacks to see this original shade. These early Labradors were either dark golden or butterscotch tinged with red. Until and even to some point after World War 11, dark yellow was the norm. 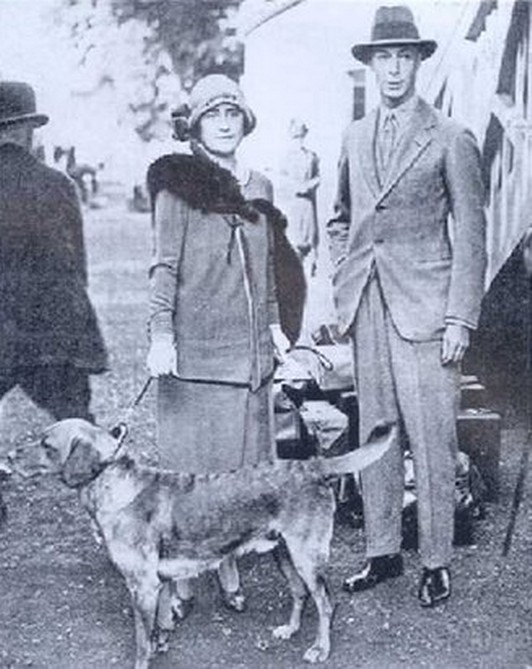 King George V1 and Queen Elizabeth with their dark yellow Labrador in the 1920's
As the years went on, the lighter Labradors became far more popular and people have lost sight of the true origin of the color. Even today, it seems the lighter the shade of yellow, the better. Some "so called breeders" are now advertising White Labradors when in fact there is no such thing within our breed. They are following the trail of the lighter the better. Due to the lack of interest and popularity of the darkest shade of yellow in the Labrador standard, it had all but disappeared. 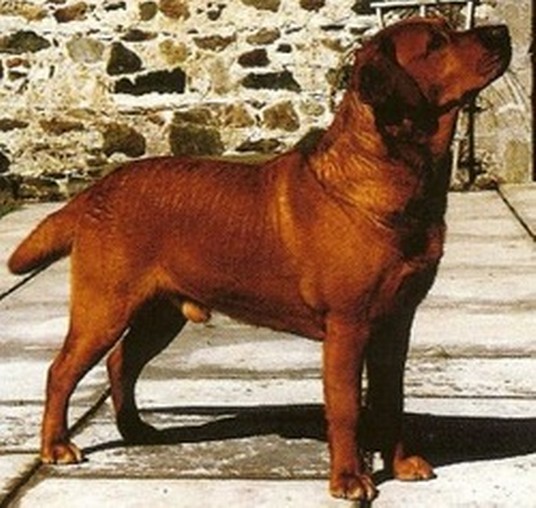 English Show Champion Wynfaul Tabasco, born in 1986
Pedigree WYNFAUL TABASCO
Two breeders from the UK, John and Glenda Crook of Balrion and Mac Bedford of Wynfaul Labradors had always had an interest in dark yellows. It was this interest that led to the rebirth of the fox red. The Crook's owned one of the most famous Labradors of all time, Ch Balrion King Frost. In his litters he seemed always to produce very dark yellows. It was one of his granddaughters that produced the great Ch Wynfaul Tabasco, the father of the modern fox red Labrador. Not only was he a stunning red dog but he had excellent conformation. He became the only modern fox red Show Champion in the UK. Just as a note, Tobasco, if you went far enough back, is decended from the last Dual Champion in Great Britain, Knaith Benjo. 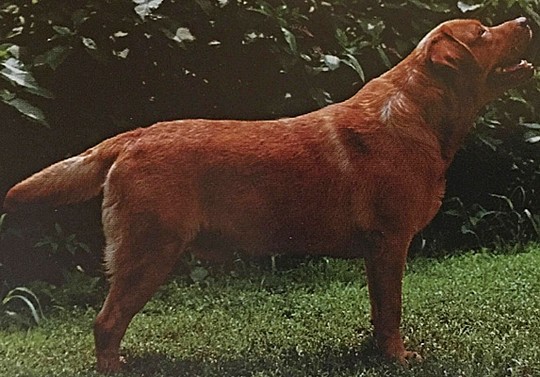 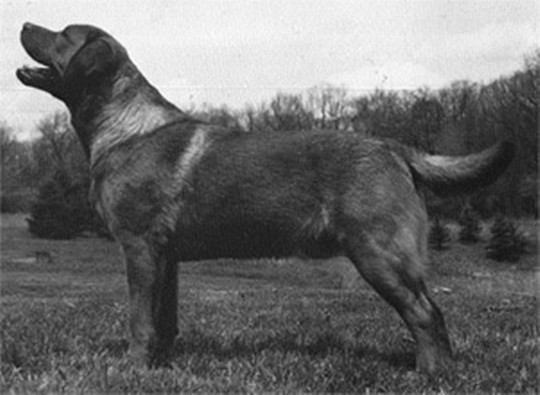 Balrion Red Alert  born in 05.06.1990
Pedigree BALRION RED ALERT
The next step, again bringing in Ch Balrion King Frost, was a breeding with Wynfaul Tabasco to Lady Bountiful of Balrion, herself a very dark yellow girl, daughter of Show Ch Balrion Kings Ransom who was a son of King Frost. The resulting litter was all fox red proving the Crook's theory of fox red to fox red will produce all fox red. Within this litter there was a red boy puppy sold to Sally Kelley of Kelleygreen Labradors in the United States, Balrion Red Alert.  A couple breeders, Kelleygreen and Keepsake Labradors through Sally Kelley's big red import, Red Alert, have done a lot in recent years to bring the color back. In most all fox red pedigrees of today, a little research will show this dog in the pedigree multiple times. 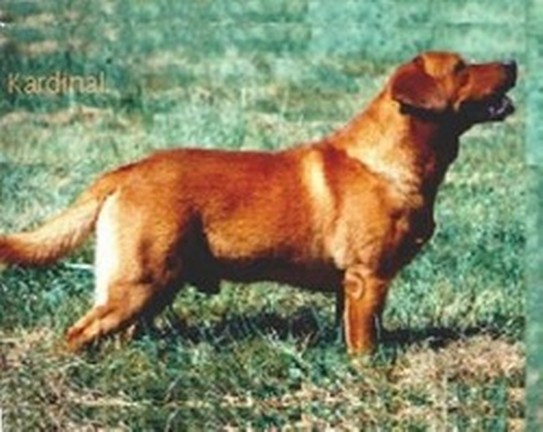 Kelleygreen's Kardinal, born in 08.07.1995
Pedigree KELLEYGREENS KARDINAL
Sally then purchased from Dot Galvin of Hennings Mill Labradors, a fox red girl, Hennings Mill Kelleygreen Henna who went back to King Frost again through her dad, Ch Scartho Frost. Sally bred her to Red Alert which resulted in an all fox red litter. Within the litter, another special boy appeared, Kelleygreen Kardinal. Many of today’s fox red Labradors can look back in the pedigree and see Kardinal one to three generations back. 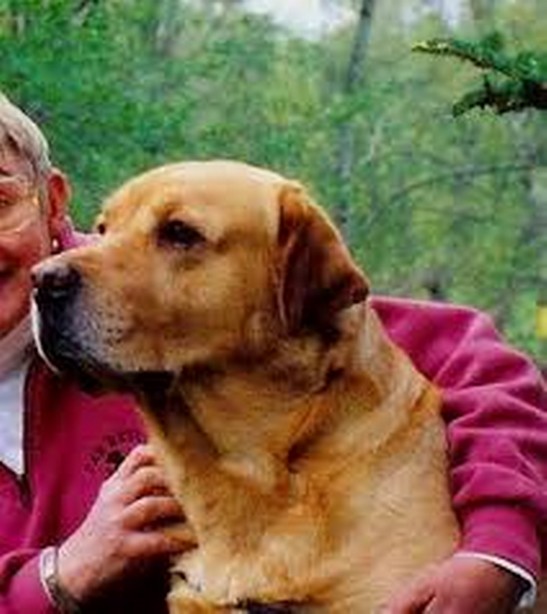 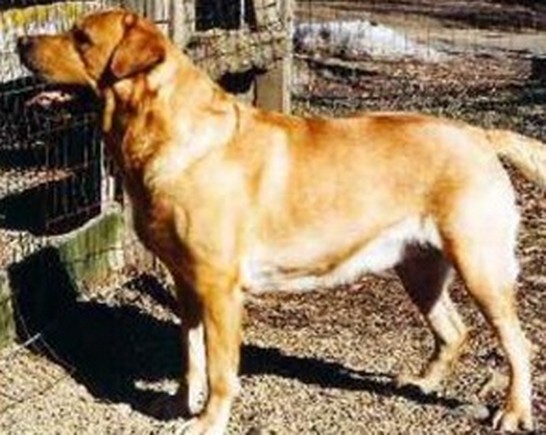 Scrimshaw Placido Flamingo, born in 06.06.1992
Pedigree SCRIMSHAW PLACIDO FLAMINGO
Another dog, while not particularly famous himself, passed his influence on into the red bitch lines of both Kelleygreen and Keepsake, was the fox red Scrimshaw Placido Flamingo. Tenor was bred by Barbara Barfield of Scrimshaw Labradors, sired by Ch Scrimshaw Duckless Fairbanks and the grandson of the very famous Ch Lindall Mastercraft. Tenor inherited the fox red shade from both sides of his pedigree, his grandfather, English Field Champion Venture of Brattonsplash and while his mom was a dark yellow, she had the red shade as well behind her. Tenor passed the fox red "C" allele on to his offspring. When bred to Kelleygreen's Lady in Red, they produced Keepsake's I Love Lucy, dam of the only AKC fox red champion, Keepsake's Cajun. Not only did he give his shade to his descendants but also his wonderful laid back temperament. This big red dog was everything a Labrador should be, a true gentleman in every sense of the word. 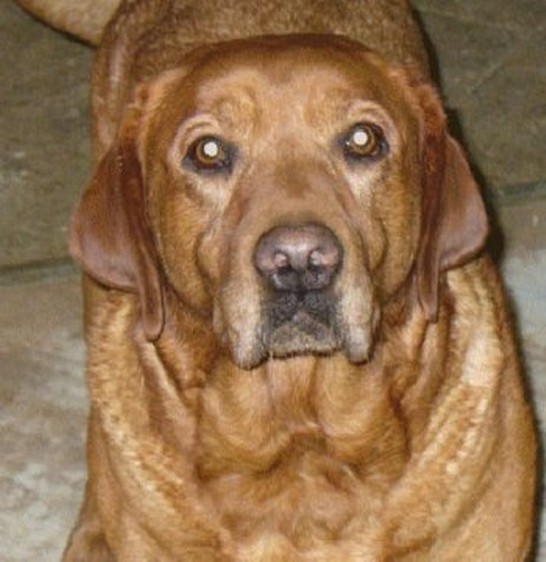 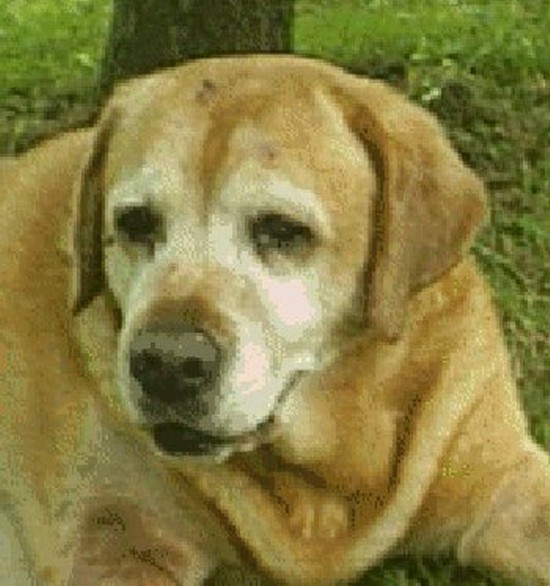 Kelleygreen Lady in Red
Thanks to Judy McCormick (Keepsake Labradors)for the pictures of her two girls that have been so important in our modern fox red Labradors. On the left we have Kelleygreen Lady in Red in all her maturity, on the right, Keepsake I Love Lucy. In all the well known show bred Labradors of today, you will find one or both of these grand ladies, sometimes multiple times, in the pedigree if you look far back enough.
So looking back over the history of the fox red shade from Ben of Hyde through today, one might argue that Ch Balrion King Frost has had the biggest influence in the re-development of the fox red shade. Each step of the way from Wynfaul Tobasco through Kelleygreen's Kardinal, King Frost certainly had a major influence in the pedigree.
http://keepsakelabs.com
http://keepsakelabs.com/foxredinfo.htm 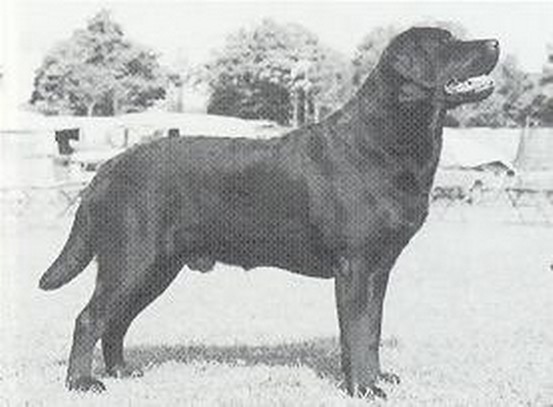